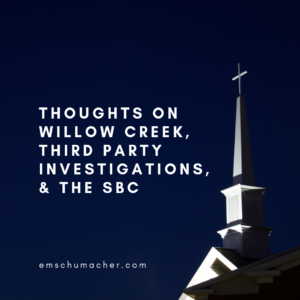 I found these elements noteworthy:

1. The external independent review and advisory group was requested to “consider… review… and make recommendations,” which resulted in “Observations,” “Conclusions,” and “Recommendations.”

2. Nothing in the scope of the group connotes the idea that the autonomy of the local church was sacrificed or that the group was given authority to operate as an authority, judge, or sentencer of individuals, churches, or associations.

3. Nothing connotes the idea that their recommendations are binding (authoritative). An investigative committee is just that—investigative. It is not an arbiter, judge, or jury.

4. The report states explicitly “The IAG has no governing or decision-making authority in Willow Creek Community Church, the Willow Creek Association, the personal life of Bill Hybels…”

What does the Willow Creek investigation show us about ITIs and IAGs?

1. An ITI is feasible, even for situations with long-standing issues.

2. An ITI can be done without compromising the polity of the local church.

3. An ITI allows elder boards and church associations significant recourse in the face of an IAG report—namely, each is free to act or decline to act upon recommendations as they please.

4. An ITI does not necessitate or require the setting aside of biblical principles for polity or justice.

5. An ITI does not subordinate the members of local churches, church leaders, congregations, or associations/denominations to the IAG, the investigators, or their standards. Neither an ITI or IAG need act as “judge and jury” over a person, church, or association/denomination.

6. Biblical commands and expectations for elders and members may be maintained during an ITI. An IAG would be informed of those and would make recommendations accordingly.

7. An ITI does not remove or replace biblical channels for an investigation into charges against an elder or restrict a member’s right to bring such a charge.

8. It is possible to establish true independence for the ITI/IAG while simultaneously maintaining biblical fidelity.

9. An ITI/IAG consisting of god-fearing Christians who honor and understand the theological convictions of a church/association can investigate, observe, consider, review, and recommend in a manner commensurate with those convictions, functioning as a supplement to and not a replacement of biblical instructions.

10. It is possible for an ITI/IAG to address issues dating back decades.

What does this have to do with the current Southern Baptist Convention discussions?

1. We have heard appeals to local church autonomy. It is argued that ITIs necessitate the sacrifice of autonomy or the authority of members or elders. Such are false assumptions smuggled in under the guise of biblical fidelity, which distract from the matter at hand. An ITI does not require this.

2. We have heard appeals to theological convictions, that an ITI cannot be guaranteed to share and respect views on polity and so forth. Again, this is a false assumption, a distraction from the matter at hand. Church councils in the New Testaments and modern church associations (such as the SBC itself) demonstrate that local churches can partner with those of like faith and practice. The idea that an IAG cannot be done by a group of theologically like-minded persons is laughable. (If we cannot find like-minded persons who are genuinely independent and objective, we might be in a cult!)

3. It is easy to imagine how a truly independent third-party investigation is a realistic possibility and a beneficial supplement in discovering facts and assessing concerns while honoring local church autonomy and the theological convictions of a church or denomination.

May God grant us grace to do justice, love mercy, and walk humbly before our God—maintaining the particular principles of our theological persuasions without neglecting to seek justice for the accused or the accuser.