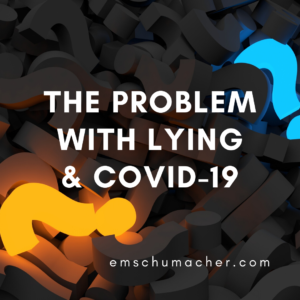 Natural-born liars. This liar lies by nature. He’s been lying since the day he left the womb.

Hateful liars. This liar hates someone else. She knows better than to say that outright. So she twists facts, insinuates, and “vents to trusted friends” to justify herself and ruin her neighbor’s reputation.

Habitual liars. Someone—family, friends, or himself—taught him to deceive, spin the truth, and conveniently “forget” as a way of life. Ask him any question, and his first instinct is to tell you a lie before the truth. Catch him in a lie, and he’ll laugh and say it was “just talk.”

Scheming liars. This liar learned that lying gets her what she wants. She has an end in mind, and she’ll tell others what they want to hear to get it. Whether leading a nation, running a business, or applying for college, she uses lies to spin a crisis, close a deal, and get accepted.

Anxious liars. This liar has a guilty conscience about many things; he always assumes he’s in trouble. Ask an innocent question, and he’ll run to a lie.

The list could go on forever. It includes all of us. No one can tame the tongue.

The Problem with Lying

We all have those people in our life, those we know to be liars. Some you confront, but there’s no change, so you learn to live with it. Some you can’t confront because the way you discovered the lie has consequences for others. Some you shouldn’t confront because it would be casting pearls before swine. But all the same—you learned not to take their word for anything.

We see this ugly consequence in our nation as we deal with COVID-19. We’ve grown accustomed to the lies of politicians, the news media, social media, the church, and experts who are willing to interpret data for access to power. We can’t complain; we’re complicit in building this culture. We expect politicians and the media to lie. When our preferred politician, party, or news source is caught in deception, we defend, support, and play the “lesser of two evils” trump card.

That becomes a problem in a global and national health crisis—particularly one with potentially serious health and economic outcomes happening during a general election year. Skim through social media or eavesdrop on a (socially-distanced) coffee klatsch. We’re polarized, politicized, and paralyzed in the face of a national crisis.

America doesn’t know who to believe or how to decide. We have no one to blame but ourselves.

Righteousness exalts a nation,
but sin is a disgrace to any people.
— Proverbs 14:34

A city is built up by the blessing of the upright,
but it is torn down by the mouth of the wicked.
— Proverbs 11:11

Smooth lips with an evil heart
are like glaze on an earthen vessel.
A hateful person disguises himself with his speech
and harbors deceit within.
When he speaks graciously, don’t believe him,
for there are seven detestable things in his heart.
Though his hatred is concealed by deception,
his evil will be revealed in the assembly.
The one who digs a pit will fall into it,
and whoever rolls a stone—
it will come back on him.
A lying tongue hates those it crushes,
and a flattering mouth causes ruin.