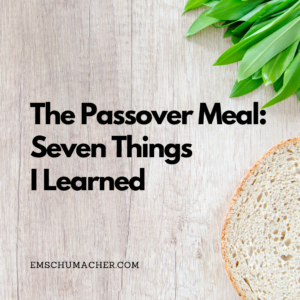 The Passover Meal. I thought I knew most of what the Bible teaches about it. But as I was studying the Thursday events of Holy Week, I learned several new things about this Old Covenant celebration.

1) “According to Old Testament regulations (Deut. 16:5-6), the Passover must be eaten within the city of Jerusalem.” (source)

(The larger context is instructing the Israelites in how to eat the meal.)

2) “This may seem to reverse the provision of Ex. 12:21–24, which envisages the Passover being celebrated in homes. Deuteronomy, however, anticipates settlement in the land.” (source)

4) So far as I can find, the Law makes no provision for eating the Passover when the nation of Israel is unable to assemble in Jerusalem (e.g., in exile). If they could not assemble, they could not eat the meal.*

5) God intended for the Passover to only be eaten in one context (the assembly of his people, gathered to celebrate the festival).

6) Deuteronomy 16:5-6 is why Jesus made advanced secret preparations to eat the Passover in Jerusalem, despite it being an increasingly dangerous location for him. He and his disciples spent each evening of Holy Week at someone’s home in Bethany—a much safer place to eat an evening meal. Nevertheless, they could not eat the Passover there; the Law did not permit it.

7) The Last Supper in the Upper Room is not a small group of friends deciding to grab some bread and wine and celebrate their deliverance. Jesus and the Twelve are faithful Israelites keeping the Law. They are assembling with God’s covenant people in God’s place to celebrate the festival according to the commandment.

Despite the danger to himself and them, Jesus insisted on fulfilling the Law. Another example of Christ being spotless and without blemish. This is Good News. He is the spotless Lamb, slain on our behalf, who takes away the sin of the world!

*I understand there is a provision in Jewish tradition, especially after the destruction of the Temple and in the Diaspora—but I’ve been unable to find that in the Bible itself. If you’ve found it, please send that info my way!