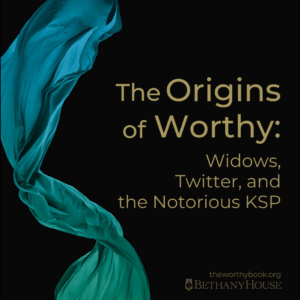 Two years ago, the inspiration for Worthy: Celebrating the Value of Women happened on Twitter.

As with all things, the origin is more complicated and far-reaching than that. It involves an “ah-ha” moment reading a review of hyper-masculinity-preaching-church-plant-movement-leading author. It involves conversations with sisters in the church, nagging doubts about how my circles applied the bible, the examples of men and women I admire, listening to the stories of #MeToo/#ChurchToo/#SBCtoo, noticing the silence of leaders I admired, and so much more.

But two years ago today, a single Tweet inspired what would become Worthy.

Karen Swallow Prior (the Notorious KSP) posted a single Tweet:

The book of Acts tells how Stephen was chosen by the 12 disciples to minister in the church because he was one “of good repute, full of the Spirit and of wisdom.”

Stephen’s job was to serve the neglected women of the church.

He would become the church’s first martyr.

I saw her Tweet the next day, as it stirred some controversy online. I read it, noticing that the neglect of women in the distribution of provisions occasioned this forerunner of the diaconate. The Apostles cared enough to see mistreated women and make arrangements to protect them.

It made wonder where else women were the impetus for something significant in the Bible. I found lists of every woman in the Bible, surveyed the scriptures, consulted resources. What resulted was a list of twenty places women played a unique role in the storyline of the Bible published in a thread of tweets (see: Women in the Storyline of Redemptive History).

The Gospel Coalition invited me to turn that list into an article, which was published a few weeks later—21 Places Women Emerge Front and Center in Scripture’s Storyline.

Elyse Fitzpatrick appreciated the article and invited me to join her family podcast (Episode 214). After I read the article, Elyse said that I should turn this into a book. I suggested that she write it with me. She proposed we talk about it off the air.

A few weeks later, I found the courage to ask her, “When we gonna write that book on women?” She was in. So, we brainstormed and, a few months later, a publisher made an offer.

1 year, 8 months, 22 days after a string of tweets, the book Worthy was born, along with a song and a podcast. I beyond grateful to God for this opportunity, and to Elyse for her friendship, mentoring, and partnership in this gospel work.