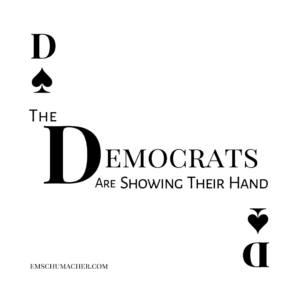 The 2020 Election would be hilarious if it were not so incredibly sad.

Four years ago, the Democrats demanded that Trump step down after learning he boasted of sexual assault. (Comments for which he offered no real repentance.)

Yet, the Democrats continue with a candidate in the face of credible sexual harassment accusations, one who continues to mislead.

Could the Democrats be more hypocritical? Yes, they could replace Joe Biden with a woman who not only supported a proven sexual abuser but publicly threw his victim under the bus. (No comment on the irony of nominating her four years ago.)

Both parties claim to value women. The actions of both prove otherwise. The Republican Party proved to me years ago (and have continued to do so) that the values they touted weren’t the values they held. The Democrats have done (and continue to do) the same.

Make no mistake: their choices are not the lesser of two (or three) evils. Both parties have thrown that argument out the window. These are the candidates the parties want. Both chose their man from a field of candidates. (The Republicans, by all appearances, will choose Trump twice. Make that three times, given that they could have impeached him and had Pence.)

This hypocrisy of their respective parties doesn’t describe every individual Republican and Democrat. But it is making me lose respect for those who only point the finger at the other side.

When a party shows its hand, let’s call a spade a spade.