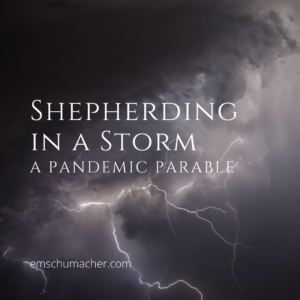 The plains city of Churchopolis rested peacefully in the heart of the Midwest.
Every Sunday at 6 pm, the residents gather in the numerous local churches for evening worship. Each congregation shares a meal, then moves into their sanctuary to sing, pray, and hear a message from the Bible. Afterward, at 8 pm, each congregation dismissed. Like clockwork, congregants filled various local restaurants for pie and ice cream.

On this particular June evening, as the congregations transitioned from fellowship hall to sanctuary, they heard the city tornado sirens. At the same time, mobile phones sounded a severe weather alert. Congregants opened weather apps and turned on radios and televisions.

What they found was alarming.

A television news station showed a video of tornadic activity far outside the city, stating it was sure that the same destruction was headed for Churchopolis.

Another station’s meteorologist warned that radar indicated the presence of several giant tornados headed toward the city.

A different station’s meteorologist asserted that the radar system indicated nothing more than a slight possibility of tornadic activity in the vicinity, noting that there was no need for alarm.

A radio station reported there was no danger of tornadic activity. There were only intensified winds, but nothing more than the average spring storm.

The tornado sirens were a sign to shelter immediately. However, an Emergency Declaration from the Mayor announced that the warning was due to an error on the part of a few City Hall interns who worked the weekend shifts. He stated that there was no need for panic or taking cover. Churches should continue with their activities.

A post on the Churchopolis People Facebook page stated that the video footage was from a previous tornado. They suggested that a few city employees and an influential meteorologist colluded to play a prank on the gullible Christians to interrupt worship. They waited for a Sunday evening with a strong possibility of severe weather to issue a false tornado warning. Several commentators verified they’d heard of this plot.

In each church, all these conflicting reports were heard by various members and staff (mainly depending on which sources they knew and trusted). Church staff disagreed on the seriousness of the situation. Church members urged diverse approaches. Some demanded that the pastors require everyone to shelter in the basement or an interior room. Others called for canceling church and sending people home to respond according to their preferences. Some requested an abbreviated service of a pray, reading a Psalm, and singing one hymn while a few deacons went outside to watch for danger. Others still stated that Christians should live by faith and not by fear, which meant gathering in the sanctuary for worship as usual.

Each approach (and many others) was adopted amongst the various congregations in Churchville.

For two hours, the sirens continued along with the conflicting weather reports and social media posts. Strong winds and thunder could be heard outside.

During that time, people debated whether they had sheltered too long or started taking cover too late. Some stopped sheltering in the middle of the storm, stating the worst must be passed. Others would remain in place until the sirens ceased. Church leaders spent themselves assuring members got home safely, comforted anxious congregants, drove through the dark and windy city to give rides to those with no place to be.

When the sirens stopped at 9 pm, people emerged from their churches and homes. They found the scattered debris, typical of a strong spring storm. A few tree limbs were broken. Small branches, leaves, and scattered lawn furniture littered lawns. The power went out in one part of town.

Some residents claimed they saw small tornados touch the tops of the damaged trees. Others posted videos to Facebook, though commenters insisted the footage was of other storms. One meteorologist reported that, fortunately, the significant tornados divided into smaller cyclones at the edge of town, only doing minor damage to treetops. Another news station said there was no evidence of tornadic activity, only a typical seasonal storm. The Mayor declared he would investigate the sirens.

Some church members and staff applauded the shelter—the absence of harm to people proved their efforts were successful. Others criticized the sheltering, saying the lack of significant damage showed everyone was worried about nothing. Some agreed that the caution was warranted—tornado or no. Yet others declared their pastors had abandoned the faith for worldly fear; they would be changing churches.

Friends of business owners complained the false alarm did incredible damage to their Sunday evening business. They lamented the lack of love on the part of church leadership displayed by sheltering. Some accused pastors of being unloving by not taking cover. Others declared they would never trust another weather report or church leaders again. A few suggested a reduction in pay—after all, the pastors hadn’t really worked that night. (What were they doing with their free time!?) Some asked to speak with church leadership after things calmed down—they had kept track of the ways they were not cared for during the storm and wanted them to know. Others wondered why leaders followed the advice of some but not others.

Church leadership disagreed about what actually happened. Some from every approach pointed fingers at others in condemnation. Christian websites, leaders, and podcasts posted strong opinions about which was the correct Christian response. A local publisher rushed booklets for purchase, written by influential and respected pastors. Some debated minutia on social media and ministerial chatrooms.

*As with all of my posts, this is not about my local church. I do not subpost my church, its leadership, or its members. If I’m talking about my church, I make it explicit.