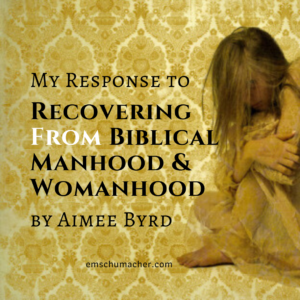 A few months ago, I had the opportunity to read Aimee Byrd’s forthcoming book, Recovering From Biblical Manhood and Womanhood. What an incredible, helpful, needed, and insightful book!

I do not have the spiritual gift of book reviews, so I won’t attempt one. But I will tell you what I thought of the book and make some observations. (And, I’ll let you in on a little secret: her book is not ultimately about biblical manhood and womanhood. It’s mistitled. It’s really a book about discipleship in the local church.)

What Aimee Is (and Is Not) Doing

Why I Say That

I say all that because I fear (with good cause) that the opposite will be said or implied about her. By all means, read careful and honest reviews from reputable sources. But ignore the hit-pieces and character assassination that are sure to come against the book and its author.

This book deserves a thorough, thoughtful, and good-faith reading by all Christians. It is an important contribution to the conversation about biblical manhood and womanhood.***

Whether you consider yourself a complementarian or an egalitarian (she critiques both those camps), you should pre-order it today. (I understand why the title will be off-putting and threatening to complementarians. Please push past that reaction. The title is neither snark nor meant as an insult. It is entirely appropriate when understood.)

A Book I Wish I Had Long Ago

I wish I had this book 20 years ago when I was entering the seminary and then the ministry. It would have prevented many pastoral missteps. It would have spared many women pain. It would have helped the church to better function as the family God intends it to be.

A number of my own concerns about my personal views were given a voice. Questions on “biblical manhood and womanhood” that I’ve been wrestling with for the past half-decade found light and help. (No, I won’t tell you what Aimee says. She wrote a book to explain herself. Go buy it and listen to her say what she says!)

I want to express my gratitude to Aimee for the courage and love it took to write this book. I am confident that the suffering you endure will reap a thousand-fold harvest of benefit to the Bride of Christ and the cause of the Gospel.

* When using the “pendulum” analogy in theological correction, we do well to realize that we’re dealing with a Foucault Pendulum (not a grandfather clock pendulum). Foucault Pendulums do not swing in “either” direction but in every direction from our perspective (I realize that they swing back and forth, but the earth rotates… Even the Bible can use analogies from a human perspective.). It is the same may theological corrections—they may go awry in multiple directions. Those who say “swing too far in the opposite direction” might be betraying a misunderstanding of the theological issue at hand or the nature of theological over-correction.

**Though abuse and mistreatment may be a motivating concern (and rightly so!), she is not responding carelessly. She is not the scorched-earth, “Hell hath no fury like a woman scorned” caricature that she is sure to be dismissed with.

***CBMW posted a critical review of RFBMW—”Does Anyone Need to Recover from Biblical Manhood and Womanhood?” Aimee has posted a helpful but limited reply—”Response to Andy Naselli.”