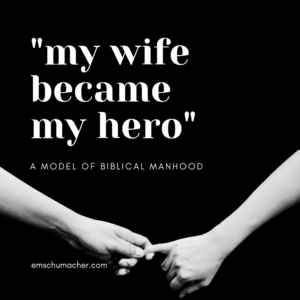 “We like to think of ourselves as the main character — the heroes — of our own stories. However, in the decade we’ve been married, I have had a growing realization that finally dawned in a Michigan courtroom in January 2018. I married the hero. At the end of the day, I’m Rachael’s sidekick — and I couldn’t be any prouder to wear that title.”

Those words by Jacob Denhollander refreshed my soul and prompted an “Amen!” as I read his first-person piece in the Louisville Courier-Journal (“In her courageous battle for justice against Larry Nassar, my wife became my hero“).

Too often, complementarian men act, think, and speak as though we should be the heroes in the story of marriage and family. So, I’m thankful for how Jacob Denhollander models true biblical manhood.

I can’t imagine listening to my wife bare her soul, sacrifice her privacy, and recount for the world the horrid details of what an evil man did to her. Then to be torn apart and vilified by secular institutions. And then to be slandered and discounted by men in the conservative Christian community.*

Jacob has been a model of grace.

*If you doubt the mistreatment of Rachael Denhollander by men in the church, I’ve witnessed it. I have, with my own eyes and ears, read and heard slanderous, sinful words about her sexual abuse advocacy by men who are respected theologians. I don’t know how Jacob does it.

I highly recommend Rachael’s memoir, What is a Girl Worth?—a must-read of 2019. Her children’s book—How Much Is a Little Girl Worth?—teaches little girls their value.