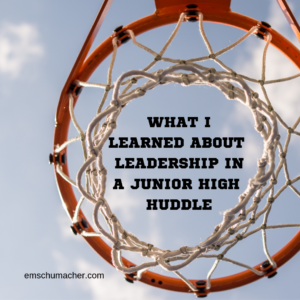 Last night, I traveled with my son to watch his friend play in a junior high basketball game.
We sat behind the home team’s bench. The home team was up by six points with less than three minutes left in the game. The visiting team called timeout.
As the home team ran toward the bench, the coach hollered out a player’s name and said, “Run the huddle.” The player didn’t hear him. So, he walked over, tapped him on the shoulder and said, “Run the huddle.”
Then the coach stepped away from the huddle four paces and let the future man lead.
If I were that coach, I would have commanded the huddle and micromanaged the team.
Instead, this coach tasked the boy with real responsibility in a real life situation with real risk. Most of all, he showed real trust. He did not tell the boy what to say. He did not hover over his shoulder. He did not threaten. He showed confidence and gave responsibility.
I learned something about good leadership.
That coach may lose a few games with this method. But he’s preparing his players to win at life.
So, how did the game end?
The home team won by three.