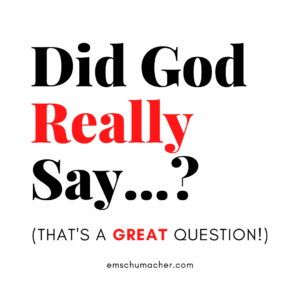 The serpent spoke those words to the women in the Garden of Eden. I’m finding the question described as the voice of the serpent in so many conversations today. I see proper, honest inquiries—the kind that astute theologians pose to understand scripture and draw precise theological conclusions—flippantly dismissed as “bad questions.” Those asking receive condemnation as those grasping for what they ought not to have, just like Eve. It’s an unfortunate, lazy, and deceptive means of silencing dissenters, and has no place in the Christian community.*

I admit that, in years past, I resorted to such dishonest rhetorical methods to cast my dissenters in a poor light. I’ve stopped characterizing the question that way. The verbal escamotage is—much like the devil’s—a deceptive (serpentine?) use of language. All one needs to do is note how another’s questioning of your interpretation sounds like Satan. You’ve won—easy as that. Who can deny that Satan asked that question? It sounds the same, so the query must be Satanic.

The approach is lazy. Rather than doing the hard work of persuasion, a specious association is offered to silence a questioner.

It’s dishonest. The fallacy of the argument is easy to see, but it scores quick points in the public arena.

It is not Christian. In fact, it works against the glory of God and the joy of all people. Jesus was not like this with honest questions. He continually distinguished between a question of faith and a Pharisaical subterfuge—because he knew the heart.

Love for neighbor is not like this. Instead of assuming the best of others and inviting them into a fruitful conversation, this approach imputes wickedness and misrepresents. Unless we know the question is not in good faith, we own a gracious and honest reply.

“Did God really say…?” Can that question be misused? Can it be asked sinfully? Absolutely it can—just like the bible, the church, and the name of Jesus! But we should be slow to ascribe devilish qualities to a brother or sister with an honest question. Characterizing “Did God really say…? as a serpentine question is to render judgment based on appearances—something Jesus condemned and forbade. Humans look at what is visible, but the Lord looks at the heart. The heart matters.

Look at the Question

Notice a few things about the original question. First, the serpent was not questioning God’s word. Instead, he asked if God said something that God did not say. Satan said, “Did God really say, ‘You can’t eat from any tree in the garden’?” God actually said, “You are free to eat from any tree of the garden…” That the dragon asked his question using an inverted quotation of God’s word demonstrates his intent to deceive. That matters. Intent matters.

Second, notice that (despite all the hand-wringing over the question) it did not trip up the woman at all. She corrected the serpent’s misquotation of God’s command with an accurate summary of his word.** Yes, she was deceived by what followed—a direct contradiction of God’s word propped up with a truth to form a deceptive declaration. But no, she was not misled by the question, “Did God really say…?” Asserting she was could be theological sleight of hand to invalidate difficult questions.

The question—”Did God really say…?”—is a great question when asked from the right heart. We should never shy away from it. We should ask, “Did God really say this?” It’s part of doing our theological homework, an essential step in coming to faith and persevering in it.

A Matter of the Heart

The issue is one of intent, a matter of the heart. In Luke 1, both Zechariah and Mary ask essentially the same question—”How can this pregnancy happen, given the human circumstances that would seem to make it impossible?” The priest is left unable to speak as punishment for not believing. The virgin receives no such chastisement. Rather, she is called blessed because she “believed that the Lord would fulfill what he has spoken to her.” Like Eve, she had faith that God was keeping his word.

“Did God really say…?” is an honorable question for sincere people to ask. Luke notes that the Jews in Berea were notably noble because they asked the question, “Did God really say…?” and then went to the source to find out. “Consequently, many of them believed, including a number of the prominent Greek women as well as men.”

“Did God really say…?” is not a question to shame. It is a question to encourage as we look at the Book. So, let’s be benevolently slow to declare the questions of faith to be the serpent’s hiss, lest we call the work of the Spirit that of Beelzebul.

*Anecdotal, but I find that this “Watch out! Satan deceived Eve by asking, ‘Did God really say…?'” argument is generally trotted out when warning women about women. One wonders if it betrays an unbiblical view of womanhood—one which sees women as intellectually weak and deceivable or inherently and especially prone to usurping (in ways that men are not).

**For a defense of this, see chapter 2 of Worthy.