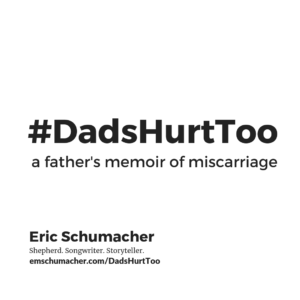 This is the fifth post in a series— “#DadsHurtToo — A Father’s Memoir of Miscarriage.”

In God’s kindness, we survived that year. Our son—Living Child #5—was born February 8, 2012, allowing us to spend the anniversary of our loss enjoying our newborn. With his birth, we were finished having children—miscarriage and the little foxes were not.

In December 2014, I accepted a call to be associate pastor at new church. We packed and moved to a new city, to this new congregation, filled with new people.

In January, we discovered that, despite our decision to be finished having children, my wife was pregnant. We hit a wall of conflicting emotions. Pregnancy had grown increasingly burdensome and destructive to her body, especially in the summer heat. We hadn’t wanted another child. Yet, we treasure children. We knew we should want this child.

It didn’t take long for our hearts to change. We grew excited about the baby; we wanted this. No sooner did our hearts warm to the reality of a new baby than the baby was gone, miscarriage at 5 weeks.

Waves of grief and emotion crashed over us. Grief over feeling grief at the news of the pregnancy. Grief over losing a baby that we now wanted. Relief at avoiding a painful and hard pregnancy. Guilt over feeling relieved—especially over a miscarriage. Shame had a field day. “What kind of a parent doesn’t want a baby? Who feels relief at a baby’s death?”

Shame didn’t arrive alone. The old fox brought a new friend to the party—loneliness. And she had a whole litter of pups.

We hadn’t told our family about the pregnancy yet. It seemed too soon to share. Shame whispered, “Can’t you hear them now: ‘Don’t you know what causes that?’ ‘Weren’t you being careful?’ ‘Ah, well, at least you have those five! No big deal!’” So, we said nothing and suffered alone.

At our previous church, a community of people we’d known and loved for years, loneliness had been my companion in miscarriage. The Sunday following miscarriage #3, most of the women talked to my wife offering sympathy; friends attended to her. I only remember one or two men giving me a hug. One met me at the door, waiting for me. His infant son had died in his arms on Christmas Day a decade before.

Other than those, while a few men may have asked how she was doing or offered a quick “we’re praying for you,” I can’t recall anyone asking how I was doing. Being burnt out from several years of church conflict, I was in no shape to ask for help. I don’t remember anyone following up with me in the weeks that followed. (Admittedly, my memory may have failed, and ask forgiveness of any sympathizers I’ve forgotten.) I don’t blame them; I’m certainly not bitter. I’m guilty of the same response. Too often, I’ve awkwardly avoided or simply overlooked such suffering brothers. We just don’t know how to deal with it, if we notice at all.

But now we were in a new church, full of new people. We were too new to have any close, time-tested friendships. So, while my wife confided in a few, I stayed silent. Shame whispered, “They didn’t hire you so that they could carry your sorrows. You’re here to carry theirs. If you share this, you’ll just be a disappointing nuisance.” This wasn’t true, of course. But shame is never one to let the facts stand in the way of an accusation.

The loneliness multiplies. How can I talk to my wife about my loss? Loneliness. How do we mourn the anniversaries of loss in a community of people that never met the one who’s missing? Loneliness. What’s a man to do?

You Are Not Alone

“I am with you always.” This is Jesus’ promise to his disciples in this world—a promise he kept when he poured out his Holy Spirit at Pentecost. A promise he keeps as his Spirit dwells in our hearts through faith.

In the midst of my shame, Jesus dwells in me.

In the midst of grief too deep for words, the Spirit intercedes on my behalf.

In the midst of a hostile culture, Jesus is with me.

In the midst of unthoughtful words, Jesus hears and sees and knows.

Fathers, as we trust that the Spirit of God dwells within us individually, we must also believe that Jesus dwells in his body corporately—specifically in the local church. Christ indwells all his people and, through them, ministers to us.

There is much grace to be found in going to church. Listen to the congregation sing the gospel, pray to a listening Father, and confess the faith. Hear the Good News declared as the word is read and preached. Watch a baptism, take the Lord’s Supper, and remember that Jesus died for you and rose from the dead.