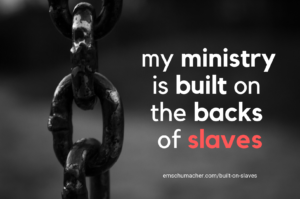 It is a severe and sobering thing to consider:

My formal theological education (and therefore a significant part of my ministry) was built on the backs of slaves.

Without them, my alma mater would have failed long before I arrived.

I descend from a northern family, from immigration to present.

So far as I know, none owned slaves.

At least one fought with the Union Army.

As immigrants, they lived by the kindness of those who did not mind their origin or lack of English, but taught them and gave them work.

My mother told me that American slavery was evil. Period.

So I’ve always had a strong aversion to benefiting from the involuntary injustice done to others.

I feel a responsibility to help those whose injustice resulted in my benefit.

I don’t know what that means in this case, precisely.

But it will be at the forefront of my mind for a long while, I guarantee.

I know that, in this fallen world, benefitting from the injustices done to others is inevitable. Civilization as we know it is built on injustice impossible for us to see in full, let alone unravel and undo.

Nevertheless, it is right to grieve.

Over the past year, I’ve come to better see and hear and learn how women have been mistreated, overlooked, and disrespected in the world and the church.

It’s been a good experience.

We should not fear to pursue such an understanding.

We should pursue an understanding of the African-American (especially slave-descendant) experience in our churches, institutions, culture, and country.

Understanding doesn’t make us weak. It makes us more like Jesus.

I am thankful for this. It is a valuable step in a worthwhile endeavor.

One question that immediately came to mind:

Why so little from recent history (1964-present)?

The last half-century is undoubtedly part of SBTS history—a portion that must significantly impact where the school is today.

Yet, in the 71-page report, these 54 years receive only two paragraphs, consisting of 229 words, and solely positive examples.

From the last 54 years of seminary history, the report only mentions two specifics: the 1995 denominational statement and the current seminary president’s condemnation of the “heresy of racial superiority,” an extended quote from which concludes the report.

However, the concluding paragraphs admit failings in recent history:

“In the decades following the civil rights movement, the seminary continued to struggle with the legacy of slavery and racism.”

Yet, the report does not reveal how SBTS continued to struggle in these decades.

Yet, the report does not disclose how SBTS failed to overcome the contradictions.

Specific, transparent statements on the failings and inconsistencies in recent history and the present would improve the report. I trust the seminary will address these as it communicates its plans to fulfill its expressed commitment to overcome them.