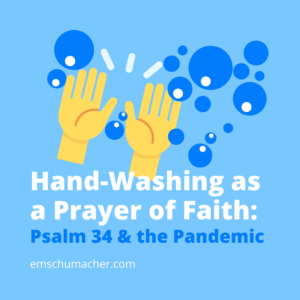 Hand-washing. Social distancing. Staying home. Are these faith or fear?

On the first Wednesday of each month, I give the chapel devotion at the local Christian school. They are memorizing Psalm 34, a few verses each month. So I walk through the verses for that month, helping the kids understand and apply them. (In God’s kindness, it’s been an excellent Psalm for preparation for the pandemic response!)

They aren’t meeting right now, so I’m recording a video devotion for them to watch at home tomorrow. I’m hoping it gives the kids the comfort of some routine, a familiar face, and truth in a scary time (as well as a break for parents!).

In preparation, I was reviewing Psalm 34 this morning. I noticed something interesting about the Psalm’s title* and the rest of the Psalm that had application to the pandemic.

Of David, when he changed his behavior before Abimelech so that he drove him out, and he went away.

And David rose and fled that day from Saul and went to Achish the king of Gath. And the servants of Achish said to him, “Is not this David the king of the land? Did they not sing to one another of him in dances,

‘Saul has struck down his thousands,
and David his ten thousands’?”

And David took these words to heart and was much afraid of Achish the king of Gath. So he changed his behavior before them and pretended to be insane in their hands and made marks on the doors of the gate and let his spittle run down his beard. Then Achish said to his servants, “Behold, you see the man is mad. Why then have you brought him to me? Do I lack madmen, that you have brought this fellow to behave as a madman in my presence? Shall this fellow come into my house?”

David departed from there and escaped to the cave of Adullam. And when his brothers and all his father’s house heard it, they went down there to him.

Now notice how the Psalm describes David’s deliverance (verses 4 and 19, two of many instances in Psalm 34):

[4] I sought the LORD, and he answered me
and delivered me from all my fears.

[19] Many are the afflictions of the righteous,
but the LORD delivers him out of them all.

It struck me how well David’s story and his Psalm connect to our coronavirus responses and precautions. Notice a few things:

The account in 1 Samuel 21 does not mention the Lord doing anything. It only records David’s actions and the result. Noticeably, this is also how the title of Psalm 34 summarizes the incident. As a result of David’s changed behavior, Abimelech drove him away, and David went away safe.

Observation 2 — David changed his behavior out of fear.

Observation 3 — David changed his behavior out of faith.

Despite 1 Samuel 21 clearly saying that David acted out of fear, Psalm characterizes David’s actions as expressi0ns of faith. Listen to a sampling of how David describes his behavior:

David describes his faux lunacy as prayer, as an act of faith.

From start to finish, the body of the Psalm gives credit to the Lord for delivering David. It is entirely a song of thanksgiving, confessing that it is the LORD who saves his people. David never gives credit to himself.

Psalm 34 and the Pandemic

So how does all apply to the pandemic? Four thoughts:

1) Faith and fear are not always contradictory. The Lord designed us to experience fear. He created our bodies and minds to recognize danger and to act, sometimes instinctively. Yes, there is a sinful, faithless form of fear. Yes, the most frequent command in the New Testament (and from Jesus) is “Do not be afraid.” But, I’m afraid, we sometimes take that command too simply. We’re repeatedly commanded to fear the Lord. At issue is what our fear prompts us to do. David’s (possibly instinctive) reaction was to feign madness. And, apparently, it was a faith-driven instinct.

We’ve seen spring-breakers, pastors, and social media pundits strut like a rooster while mocking those taking precautions. “Those people taking precautions are cowards. I’m not afraid.” “Our church is going to meet. We’re not giving in to fear. We have faith.” Their arguments are specious, appealing to a false dichotomy. Their error stems from not understanding that appropriate fear and reverent faith can be friends.

2) Altering behavior to find safety is not at odds with faith. As seen in the previous point, modifying our behavior can be an act of faith. David never mentions his changed behavior in the Psalm, despite it being the context for his song. As we’ve seen, David describes his conduct as an act of faith—seeking, crying out, and looking to the Lord whom he fears and in whom he takes refuge.

3) The Lord often works through human means to deliver his people. Neither the title of Psalm 34 nor the account in 1 Samuel ever mentions the Lord at all. They only record David’s actions. Yet, listen to a sample of how David describes his deliverance:

David describes his deliverance as something the Lord did—despite it happening through David’s change of behavior.

We could multiply examples of this throughout Scripture: Joseph, Ruth, Esther, Paul.

4) Modify your behavior both because you fear the virus and because you trust in the Lord. Don’t be duped by bad arguments or the misapplication of Scripture. God gave us the common grace of medical professionals to warn us of the dangers of the pandemic and to teach us the proper precautions. He gave us a brain and body that are properly afraid us such things. He gave us his Son Jesus, who lived a perfect life, died for our sins, and rose from the dead. Through faith in Christ, he gives us the forgiveness of sin, the indwelling of his Spirit, and the promise of a resurrection from the dead. So, we live this life observing proper precautions, recognizing them as God’s grace to us, while confident that (should he will they fail) he will not fail to raise us from the dead.

So what should you do in a coronavirus pandemic? Among other things, express your faith in the Lord Jesus through social distancing, washing your hands, and staying at home.

*Some of the Psalms have titles. In versions (such as the ESV), they appear in SMALL CAPS. These are original to the Psalm text, and I take them to be inspired Scripture. These are different than the bold headings that translation editors sometimes supply.